The Kingston Trio had a 1950’s hit song in which they proclaimed a myriad of problems in the world before confessing “I don’t like anybody very much.”

We sort of get the feeling now that the song is more applicable today than ever before. Between the Planned Parenthood-led 200-car caravan driving by the Tennessee governor’s home to protest the state’s heartbeat bill and the 44 percent of the public who tell pollsters that abortion is morally acceptable, it would seem that our nation has been dutifully indoctrinated by the culture of death.

One wonders if the pro-abortion public of our day are products of those who taught them in the schools over the past 40 years that there was no actual right and wrong but only personal opinion. As Professor William Brennan told us more than 20 years ago in his essay “Anti-Fetal Rhetoric: America’s Best-Loved Hate Speech”:

Relegation of undesired preborn humans to the noisome level of “waste,” “garbage,” and “refuse” constitutes another way of depicting the unborn as repulsive and potentially hazardous matter that must be disposed of immediately. This mode of denigration is considered particularly apt since dismembered aborted bodies often share the same ultimate fate as real waste products: incineration. . . . Finnish fetal researcher Dr. Martti Kekomaki rationalized the harvesting of fetal organs with the statement, “An aborted baby is just garbage . . . just refuse.” Harper’s editor Lewis Lapham furnished an identical rationale in support of the use of fetal brain tissue to treat Alzheimer’s patients: “We’re talking about a waste product here: thousands of fetuses are discarded every day.”

With that level of disdain for the innocent preborn child, is it any wonder that today we witness Americans shooting people, destroying businesses, knocking down and defacing statues, and disparaging law enforcement? Such people are discarding social mores faster than Kleenex! The barbarians are not at the gate; they are among us! Clearly they “don’t like anybody very much”! 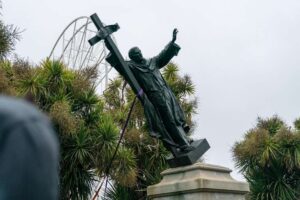 And in the midst of all this, the babies continue to die, moral leaders—including Catholic bishops—remain ensconced in their upper rooms, and the beat goes on. Have those ordained to the Catholic priesthood failed to realize that the bloodshed of nearly 50 years of murdering innocent preborn babies was bound to wreak havoc in our society in general? Where is their wisdom and leadership in these times of trial?

It is not a stretch to say that, for at least one archbishop, political correctness is the choice. Archbishop Wilton Gregory of Washington, DC, echoes black activists’ cries for racial justice. But while he says that racial equality is part of pro-life advocacy, he goes on to betray millions of preborn children by saying that “birth is only the first moment of a person’s human dignity, which is never lost throughout the journey of life.”

Clearly he has intellectually chosen to dismiss the human dignity of every preborn person of every race from his biological beginning forward to birth. What a travesty; what a verbal crime! No wonder our nation is in chaos.

While Christ “drove out the spirits with a command and cured all who were sick,” Gregory and his ilk seem to welcome evil and deny fundamental truth. God help us all!

Cowardice excuses all manner of violent protests; cowardice permits the murder of innocent babies. Until such time as our spiritual leaders decide to choose the way of the cross over the blindness of the world, we can expect more of the same.