Home » News » Does Life Stand in the Way of Liberty?

Does Life Stand in the Way of Liberty?

Reflections on the 2020 March for Life

Étienne Gilson is one of the clearest thinking philosophers of the 20th century. As any good philosopher, he fully understands the importance of reason—a power that is often downgraded or even dismissed in the modern world. In an address he gave at Harvard’s Tercentenary Celebration in 1936, he made the following statement:

“Realism always was and still remains the source of our personal liberty. Let us add that, for the same reason, it remains the only guarantee of our social liberty.”

Jacques Maritain concurs, citing St. Thomas Aquinas, who states that “the entire root of liberty is constituted in reason” (De Veritate 24, 2). Maritain goes on to say that when reason is suppressed, what is left is not liberty, “but that amorphous impulse surging out of the night which is but a false image of liberty.”

Reason connects us with reality. Liberty is one of its offspring. We are not free if we cannot see where we are going. In fact, we are lost—and lost without a compass or a map. We are lost because we disregarded reason and expected liberty to bloom in a vacuum.

At the recent March for Life (January 24, 2020), President Donald Trump became the first sitting president to join the hundreds of thousands who traveled to Washington, DC, to stand up for life. The following excerpt from his address indicates his preference for concrete realities over airy abstractions: “When we see the image of a baby in the womb, we glimpse the majesty of God’s creation. When we hold a newborn in our arms, we know the endless love that each child brings to a family. When we watch a child grow, we see the splendor that radiates from each human soul. One life changes the world. . . . We cannot know what our citizens yet unborn will achieve. The dreams they will imagine. The masterpieces they will create. The discoveries they will make. But we know this: Every life brings love into this world. Every child brings joy to a family. Every person is worth protecting. And above all, we know that every human soul is divine and every human life, born and unborn, is made in the holy image of Almighty God.” It was an eloquent testimony to the value and dignity of human life.

On the other hand, a number of Democrats—infuriated by the president’s stand—have pledged that concern for life must not stand in the way of liberty. As “liberals,” they want to secure, through a federal law, the liberty of a woman to choose abortion. Thus, the clash comes down to life versus liberty. But this is a false dichotomy since life and liberty do not oppose each other. The very first sentence of Laurence Tribe’s book Abortion: The Clash of Absolutes reads as follows: “This book is about a clash of absolutes, of life against liberty.” His fatal mistake is to make liberty an absolute, whereas, in truth, liberty can flourish only when it is rooted in reason.

When liberty is viewed as an absolute, all life is threatened, not only that of the preborn child. This is because liberty is no longer tempered, directed, or enlightened by reason. Reason tells us that the preborn child is a member of the human family and thus deserving of the same protection extended to all human beings. Respect for life, therefore, becomes the ground for respect for liberty, which is a liberty that does not “clash” with life. To choose liberty at the expense of life is to lose both.

Justice Harry Blackmun, who wrote the 1973 Roe v. Wade ruling, made a most revealing statement in the 1977 Beal v. Doe Supreme Court case. “The cost of a nontherapeutic abortion,” he wrote,

“is far less than the cost of maternity care and delivery, and holds no comparison whatsoever with the welfare costs that will burden the state for the new indigents and their support in the long, long years ahead.” This is a far-reaching form of liberty that pretends to see into the future. By this cost calculus, liberty would endanger all life.

To reiterate the words of President Trump,

“We cannot know what our citizens yet unborn will achieve. The dreams they will imagine. The masterpieces they will create.”

President Trump’s speech is a defense of true liberty, but it’s placed in the context of real human life that evokes notions of love, joy, potential, and even the hand of God.

Dr. Donald T. DeMarco is professor emeritus at St. Jerome’s University and an adjunct professor at Holy Apostles College & Seminary. He is a regular columnist for the St. Austin Review. His latest books, How to Navigate through Life and Apostles of the Culture of Life, are posted on amazon.com.

This article, and others like it, can be found at clmagazine.org/topic/abortion/does-life-stand-in-the-way-of-liberty.

No Ceiling on Abortion

By Judie Brown The March for Life came and went as quickly as grains of sand flow through a baby’s fingers. We walked with thousands…

Read More »No Ceiling on Abortion

How Will Nellie Gray and Dr. Mildred Fay Jefferson Inspire You?

By Susan Ciancio Nellie Gray and Dr. Mildred Fay Jefferson have a lot in common, and there’s no better time than the time leading up…

Read More »How Will Nellie Gray and Dr. Mildred Fay Jefferson Inspire You? 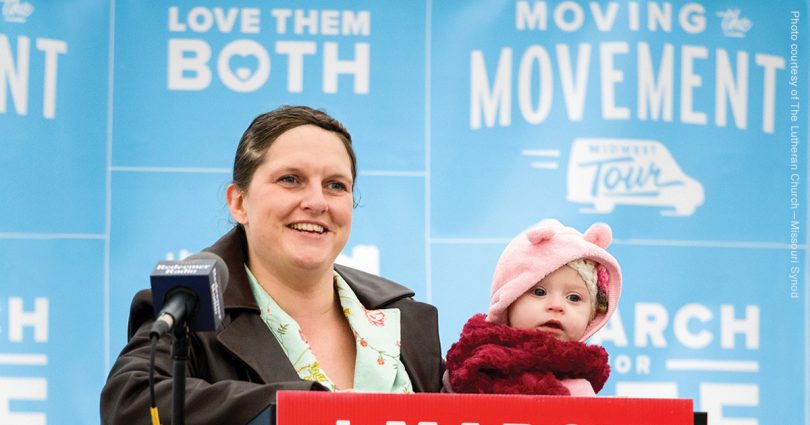 Moving the Movement: A 2021 March for Life Alternative

By Karen Mahoney In January 2021, the COVID-19 pandemic that shuttered schools, churches, and businesses also changed the March for Life Chicago. But its organizers…

Read More »Moving the Movement: A 2021 March for Life Alternative