This is the season of elections, deceptions, and misinformation on the truth about abortion. I call it the baby plague.

During a recent town hall meeting, presidential candidate and fake Catholic Joe Biden was asked what he would do as president if Amy Coney Barrett were confirmed to the Supreme Court and voted to overturn Roe v. Wade. He stated that, if Roe were to be overturned, “the only responsible response to that would be to pass legislation making Roe the law of the land.”

Biden is so fearful of the truth about what abortion does to a preborn baby that he will do anything to ensure those deaths. He does not want to catch the baby plague.

When Bishop Joseph Strickland of Tyler, Texas, learned of Biden’s latest defense of aborting babies, he tweeted: “We must speak against the fallacy that abortion is about a woman’s health care. Interrupting the natural process of pregnancy is actually a threat to a woman’s health. And to speak of the murder of the child in her womb, death by dismemberment is evil.”

Strickland writes a truth so simple and easy to understand that one wonders why, in politics, the preborn baby and his rights are nearly always treated as a plague far worse than the coronavirus.

Biden, Pelosi, Durbin, and other fraudulent Catholics persist in their support for killing babies prior to birth, and sadly most bishops look on.

As a Catholic who has long believed that we will be known at our final judgment by the acts and the words that define us, I not only worry about the abusive attitudes of public figures who treat babies like a plague, but I pray for all the souls who have been misguided because of their deceptive antics. But in many cases, it is the courageous Catholics who take the brunt of all this vilification.

Even a Catholic jurist and scholar cannot avoid the talons of the vultures and the poison of the political asps. Supreme Court nominee Amy Coney Barrett has been mightily criticized for her involvement in an ecumenical organization, not to mention her commitment to her Catholic faith. Barrett is taken to the media woodshed because she has voiced support for restrictions to abortion. In fact, some have labeled her an enemy of women’s rights and a “handmaiden of patriarchy.”

Where will it end? I had hoped we might get some help at this juncture from the Holy Father himself, but that was not meant to be. 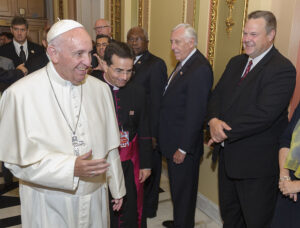 In his October 3 encyclical, Fratelli Tutti (On Fraternity and Social Friendship), Pope Francis talks about the problems man has created in a “throwaway world.” He notes the preborn, the elderly, and the impoverished among them, but in the course of the following 287 sections he never mentions the cruelty of euthanasia or the murderous practice of abortion.

When he addresses the responsibilities of politicians in section 188, he avoids abortion and euthanasia while mentioning all manner of other social degradation and their magnitude. But not killing the preborn or the elderly. What a shame. I thought I was reading Bernardin’s 1976 Seamless Garment argument and felt a pang of sadness.

Regardless, this is a time for Catholics to be bold and courageous about Catholic teaching. Our God-given gift of faith is never something to be ashamed of or apologetic about. What we ought to be apologizing for are the likes of Biden, Pelosi, and others who are literally making a mockery of Christ and His Bride, the Church.

We know that abortion is murder, that preborn babies are human beings, and that truth is the only thing that will set us free.

For us, the babies are not a plague. They are an immense blessing. Today, as always, we are called to say so no matter what arrows or venom may come our way.