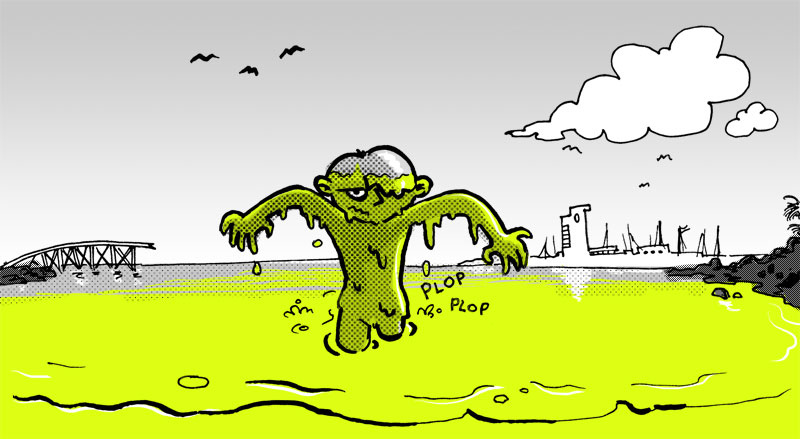 Now that the elections are in the past and people have, for the most part, settled back into normalcy, some of us are left with a sinking feeling that perhaps the culture of death’s brand of slime really didn’t register as people were voting.

On the one hand, we realize that nobody can legislate away attitudes and practices. On the other, we know that there is now a golden opportunity to cut Planned Parenthood off from the tax dollar trough if those elected have the resolve.

This is where the question of slime enters. And we see examples almost everywhere.

Congresswoman Marsha Blackburn, of The House Select Investigative Panel, has been working diligently to get to the bottom of the baby body parts for sale controversy. So the question now is whether this important work will continue after a new Congress convenes. Or will other priorities take precedence?

Then there’s the reported “rush” by American women to load up on long-acting contraceptives. Why? Well, according to one report there is fear, fueled by the pro-aborts of course, that when Obamacare is dismantled and rewritten as something new and better, their cherished birth control methods will no longer be covered.

Let’s get this straight. Birth control methods are not medication in the sense that they do not treat a disease; they merely prevent—or are alleged to prevent—a so-called unintended pregnancy. That means that women use birth control because they want to have sex and do not want to accept the responsibility of a pregnancy (a baby) should they become mothers! As Planned Parenthood’s founder Margaret Sanger put it, “[Our objective is] unlimited sexual gratification without the burden of unwanted children.” Say what?

Why should federally subsidized healthcare pay for that? Are you and I responsible for the female devotion to sexual gratification? I think not. But will the new healthcare rules and regulations, once in place, really deny tax dollars for these chemicals and devices?

In another example of the prevalent slime, when people went to the polls in Colorado, they voted in favor of imposed death, though the proposal that won the popular vote was described as “assisted suicide.” In Washington, DC, the city council approved the same sort of proposal, though “the vote does not mean legalized assisted suicide is now the law in the district. The measure moves to Mayor Muriel Bowser for approval or veto. If it is approved, the law would be subject to congressional review.”

Does this mean that the newly elected United States Congress might step up and do the right thing, making it clear that helping people kill themselves is not in accord with respect for the dignity of the human being?

We have other examples of slime, such as an Obamacare database that shows how pharmaceutical companies have been profiting from the abortion industry! According to LifeSiteNews, “The database allows for a glimpse into the nature of the work provided by some Planned Parenthood doctors, which is paid by the commercial sector. Those physicians offer consulting services and conduct research studies and clinical trials (testing of drugs, medical devices or procedures) for pharmaceutical companies.”

Will Congress fix this problem when it dismantles Obamacare and develops a new healthcare plan?

We do not know!

What we do know is that Congress is going to have a lot on its collective plate. And we also know that too many Americans hold their so-called reproductive rights very close to their desensitized hearts.

What that means for you and me is simple. The more education we provide to the brainwashed populace at large, the better the chance that Americans will support actions taken by Congress to sweep up the slime and send it into that draining swamp we heard so much about during the election.

We are the ones who have to muster the will to speak up, touch hearts, and change minds. We do not know what Congress will do, but we know what we can do.

Every tool you need to teach children, young Americans, and others how to end Planned Parenthood’s grip on tax dollars, the abortion industry’s ongoing deception, and more is available. Just check out ALL’s amazing resources (listed below) and get to work.

Maybe the slime was not on America’s mind, but we can help people think about it, learn about it, and then do something positive about it.

To see documented proof of Planned Parenthood’s debauchery and to learn ways to stop its spread, go to stopp.org.

To join with youth outreach for a pro-life generation, go to lifedefender.org.