How do we know? Let us count the ways.

Over the years Planned Parenthood has bestowed Margaret Sanger Awards to individuals who exemplify “leadership, excellence, and outstanding contributions to the reproductive health and rights movement.” Some of these folks are well known; others are not.

This is a legitimate concern because Sedlak is “aware from . . . conversations with former Planned Parenthood affiliate board members that the organization frequently hides things from” those who perhaps blindly accept awards and recognition from Planned Parenthood.

One of the reasons why more people do not know the truth is that complicit media have provided a blanket of protection to Planned Parenthood. Reporters label the organization iconic, a champion of reproductive rights, and a safe haven for teens. In fact, most statements made by Planned Parenthood go unchallenged by the elite media’s fact checkers.

So, is it any wonder that average folks really do not know the truth about Planned Parenthood?

No! And this is why the organization will continue its racist policies in honor of its founder, Margaret Sanger, while publicly proclaiming the removal of the Sanger name in convenient places. 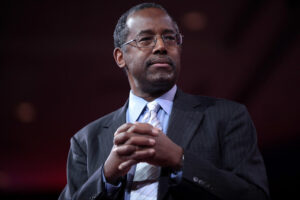 Dr. Ben Carson, the Trump administration’s Housing and Urban Development secretary, spoke about Planned Parenthood, eugenics, and the location of its clinics a few years ago and supported his comments with a map showing where the facilities were located. He said:

I’m not objective when it comes to Planned Parenthood. But you know, I know who Margaret Sanger is, and I know that she believed in eugenics, and that she was not particularly enamored with black people.

And one of the reasons that you find most of their clinics in black neighborhoods is so that you can find a way to control that population.

Dr. Carson is not alone. More recently, Candace Owens has shone a light on Planned Parenthood; Kanye West and NFL tight end Ben Watson have done it as well. But frankly, more people in the public eye need to do so before the slumbering population awakens to the fact that Planned Parenthood itself—not just Margaret Sanger’s name—needs to be canceled.

Alveda King, Martin Luther King’s niece, summed it up nicely when she said: “Margaret Sanger and the organization she founded have been working to annihilate the black community for 100 [years].” King went on to say what each of us has been saying: If Planned Parenthood really wanted to end racism, it would begin by stopping the aborting of preborn babies of every race.

Until then, anything short of that is a hollow response from an organization that prides itself on building its abortion business, marketing contraceptives that can kill preborn children, and stealing the souls of the young by polluting young minds with pornography.

Margaret Sanger would be proud!