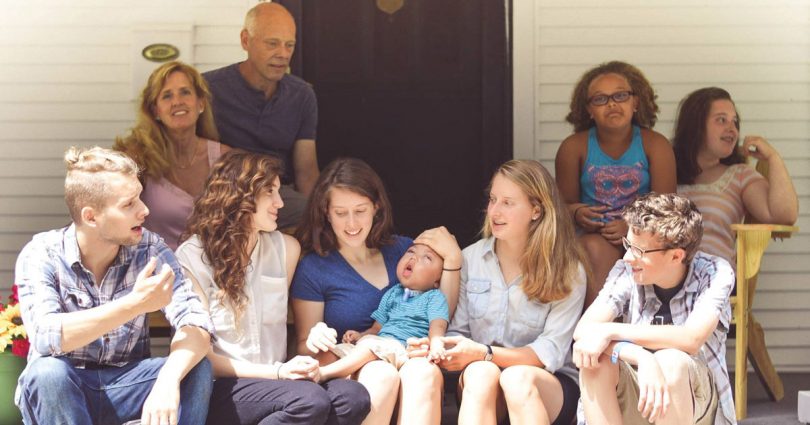 Cori Salchert walked into the eastern Wisconsin hospital where she’d worked as a bereavement specialist to families whose babies had died on the labor and delivery floor. But she wasn’t there to minister to hurting families. She was there to clean out her office. For the past few years, Cori had suffered with an autoimmune disease that had left her unable to work.

“I loved my job, but God had to empty my hands of it,” Cori said. “Because He had another job for me.”

That same day in August 2012, Cori entered the NICU of another Wisconsin hospital. There she met an unnamed two-week-old baby girl. The baby had been born with just a brain stem. She was missing both hemispheres of her brain and was expected to die at any time.

Due to safe-haven laws, which allow biological parents to relinquish an unharmed infant without fear of punishment, this baby girl was available for adoption.

Cori, her husband, Mark, and their eight biological children opened their home and their hearts to this baby girl, whom they named Emmalynn. Emmalynn suffered from daily seizures, which Cori described as “just part of the package” when caring for a terminally ill infant.

“Many people don’t understand how we can take in a baby who we know will die,” Cori said. “But death is not the worst-case scenario. Not having lived at all is far worse. We wanted to give Emmalynn a life.”

Cori adopted a new mantra. “Have baby—and oxygen tank. Will travel.” Emmalynn went everywhere her family went. “We wanted to pack a lot of living into her short life,” Cori said.

On September 26, 2012, Emmalynn drew her last breath and passed away peacefully in Cori’s arms. She lived just 50 days.

“We’d promised Emmalynn that we would love her through her life and her death,” Cori said. “It wasn’t easy, but she was worth every tear we shed.”

While Emmalynn’s death was extremely difficult for Cori and the family, caring for Emmalynn enabled Cori to redeem some heartbreak from her childhood. When Cori was four years old, her infant sister, Amie, contracted spinal meningitis. The high fevers left Amie physically and mentally handicapped. When Amie was five, she went to live in a children’s home for kids with severe impairments.

“My parents were told that it would be better for Amie if we didn’t visit her,” Cori said. “I only saw her 5-6 times after she left. It was like she disappeared from our lives.”

When Amie was 11 years old, the children’s home had a picnic. One of the caregivers took Amie to the restroom and then stepped away to check on the other children. Amie found an unlocked door and left the property.

That day, Amie drowned in a pond on a nearby golf course.

“I’ve always felt a huge ache in my life because I didn’t really know Amie and she didn’t really know me,” Cori said. “Because of my age and level of knowledge at the time, I was incapable of making a tangible difference in my sister’s life. But today, I can make a difference for other children because those barriers are not there anymore. I am an adult now and I choose to care for these babies. I want to make the difference for them that I could not make for Amie.”

A home for Charlie

In October 2014, two years after Emmalynn’s death, Cori and her family got a call about another baby who needed a family to love him. Charlie was four months old, and he hadn’t yet been able to leave the hospital. “Before we even saw him, our family decided that we were going to welcome Charlie into our home,” Cori said. “But when I met him, I realized that his condition was more involved than we knew.”

Charlie uses a ventilator to breathe, he has a tracheostomy, and he is profoundly mentally handicapped. “His condition was a bit overwhelming at first,” Cori said. “I felt out of my league with his medical issues, but we chose to trust God and take Charlie home anyway.”

When Cori feels overwhelmed, she just does the next thing. “I remember that God’s mercies are new every morning,” she said. “Doing this has given us a lot of opportunities to trust God.”

Charlie’s bedroom is like an ICU in their home. “It could feel very sterile, but we’ve tried hard to make it fun and homey,” Cori said. “Charlie sleeps in a hospital bed, but we built a frame around it that looks like a boat. His medical supplies are in buckets with dinosaurs on them. We want to make his care as fun as we can.”

Children with Charlie’s medical needs rarely live past two years of age, but Charlie is now three-and-a-half years old, and as Cori notes, “He has a life and a family who loves him.”

Cori knows that she can’t prevent the children from dying, so she places their lives in God’s hands. Cori’s sister was alone when she died and she can’t stand the idea of another child dying alone. “I want to love them for their entire lives, no matter how long that is,” she said.

I will love you forever

Cori recently spoke at a Sanctity of Life event in Ohio. “I want to encourage others to consider adoption,” she said. “Medical knowledge is not a pre-requisite. The only requirement is to be willing to do what God asks of you.”

In March 2018, Cori took on a new role: author. She wrote a memoir entitled I Will Love You Forever. The book is a moving account of Cori’s experiences with Emmalynn and Charlie, as well as Amie’s life and death and Cori’s health crisis, which made her available to adopt.

To date, the Salcherts have fostered or adopted seven children. “My calling is to love God and love those He puts in my path,” Cori said. “We want to open our home to the kids who God wants us to have.”

Diane Stark is a wife, mother of five, and freelance writer. Her work has been published in more than 40 Chicken Soup for the Soul books, and she has won three Church Press Awards. Diane writes about the important things in her life: her family and her faith.

This article has been reprinted with permission and can be found at clmagazine.org/topic/adoption/youll-never-be-alone.