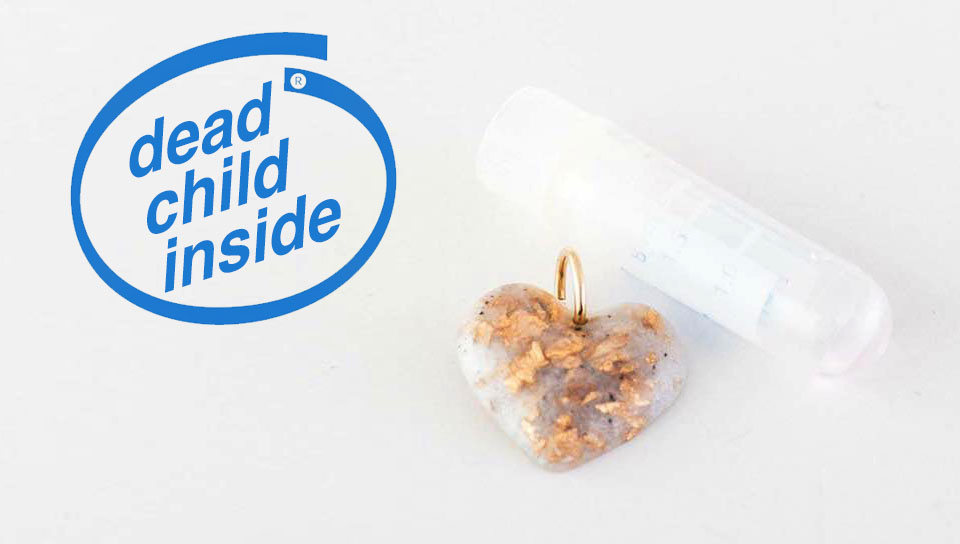 The latest fashion news from Australia is truly demonic: “Human embryos left over from in vitro fertilization (IVF) procedures, as well as other bodily parts and fluids, can be transformed into jewelry.”

Baby Bee Hummingbirds, the company manufacturing these trinkets, is known for creating keepsakes containing such things such as breast milk and umbilical cords. Its latest product, the “leftover” human embryos from a couple’s IVF cycle, is, according to company founder Amy McGlade, a work of art. McGlade stated: “I don’t believe there is any other business in the world that creates jewelry from human embryos, and I firmly believe that we are pioneering the way in this sacred art, and opening the possibilities to families around the world.” McGlade says that this pioneering art of embryo jewelry is her way of giving couples “the everlasting tangible keepsake of a loved one that you can have forever.”

Naturally, many people find this disturbing. Writer Simcha Fisher is as disturbed about this latest Australian fad as we are, and in response to McGlade’s sentimental query “What a better way to celebrate your most treasured gift, your child, than through jewelry?” wrote:

Well, you could let him live, I suppose. You could allow him the basic dignity of spending time in the womb of his mother, to live or not, to grow or not, but at least to have a chance. You could celebrate the life of your child by giving him some small gift of warmth and softness, however brief, rather than letting him travel in an insulated pouch from lab to lab, frozen and sterile from beginning to end. You could conceive a child so as to give him life, and you could rise like a human should above the blind proliferation of biology.

Jennifer Lahl of the Center for Bioethics and Culture Network expressed her disgust as well: “It’s so undignified that these embryos have been destroyed to become jewelry. . . . I thought, ‘My gosh, it really has hit rock bottom.’”

But what many people apparently do not see is that the floor—or should I say the underside—of rock bottom where the synergies of evil reside is the practice of IVF itself. That is where the lack of respect for the dignity of human beings actually beings.

The Catholic Church has long held that, from a merely humane view of the child, we must realize that nobody has a right to a child. We must also understand that every child has the right to be procreated within a marriage and to have a stable family from the beginning. And certainly no child should ever be strung around someone’s neck in a piece of jewelry.

During the reign of Pope Benedict XVI, the Congregation for the Doctrine of the Faith issued the document Dignitas Personae in which it stated: “The Church moreover holds that it is ethically unacceptable to dissociate procreation from the integrally personal context of the conjugal act: human procreation is a personal act of a husband and wife, which is not capable of substitution. The blithe acceptance of the enormous number of abortions involved in the process of in vitro fertilization vividly illustrates how the replacement of the conjugal act by a technical procedure—in addition to being in contradiction with the respect that is due to procreation as something that cannot be reduced to mere reproduction—leads to a weakening of the respect owed to every human being.”

There is no doubt that the progeny of in vitro fertilization and other reproductive technologies has done nothing to restore respect for the dignity of the human person. On the contrary, it has contributed to a cultural attitude that the human embryonic child is a thing, a possession, and a biological sample that can be accepted, destroyed, or frozen in time in a piece of jewelry.

Business enterprises like Baby Bee Hummingbirds gain traction in society because the bearing of a child has become nothing more than a mechanical function. And that, my friends, has taken the jewelry business to a new hellish low.