The Real Presence and Misguided Catholics 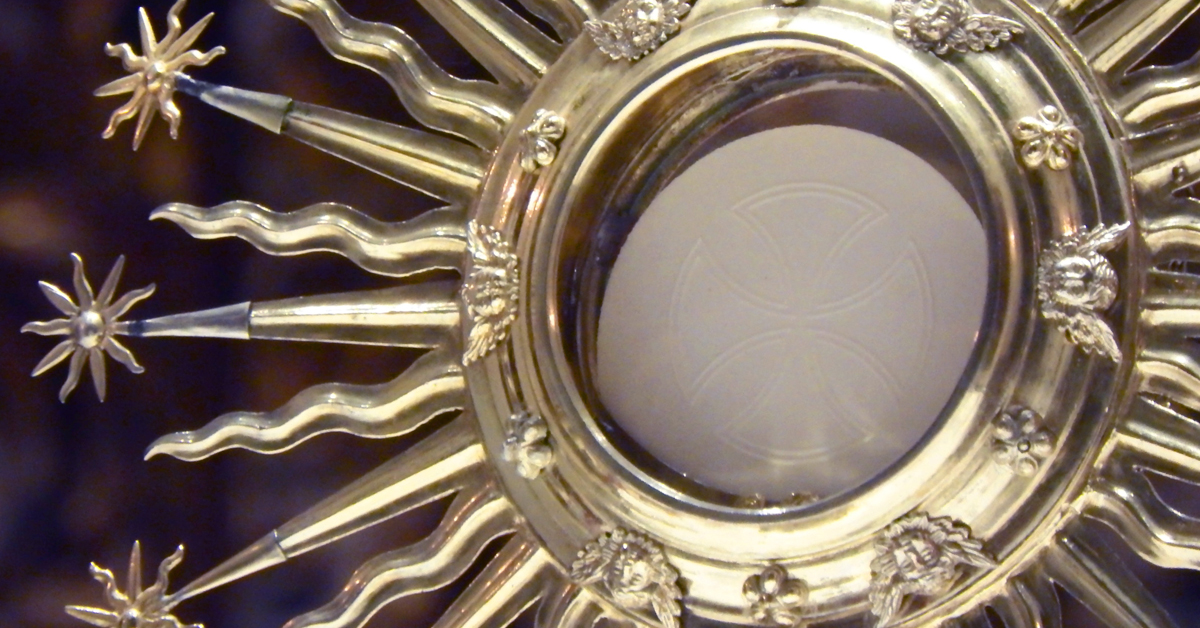 The Real Presence and Misguided Catholics

At the Last Supper, Jesus Christ celebrated the first Mass. During that event He consecrated the bread and wine which became, through transubstantiation, His body and blood. Christ’s real presence—His body, blood, soul, and divinity—is actually, not symbolically, present in every consecrated host. Thus, His words “This is My Body” are a testament to the actual nature of the sacrament of the Eucharist.

Christ is unseen but is truly present.

Catholics who defend innocent people—including those prior to their birth—often say that the real presence of Christ in the Eucharist is similar to the real presence of the baby during his prenatal life. In the same way that we cannot see Christ with our eyes but know that He is present, so too we cannot see the baby before he is born, but we know that he is present. Likewise, we cannot see that baby’s soul, but we know it is there, and we know that God is present in every soul. So it follows that every act of abortion is an act of murder. Every abortion kills a human being who, though truly present, is like us in every way, except that he is unseen.

Yet the bad news for babies continues, including the recent judicial approval in Kansas for the ripping apart of a preborn baby’s body and the refusal of Arizona state senators to vote in favor of a proposed law that would have ended abortion for genetic abnormalities such as Down syndrome. These political actions are the most recent in a long line of detestable deeds carried out in the name of reproductive choice. Such things happen in part because many Catholics have rejected the real presence of Christ in the Eucharist and have failed to stand up and defend the real presence of preborn children as well.

If every person who called himself Catholic fought to defend innocent life, there would be no news like that cited above. That’s why we are grateful for the recent words of Bishop Thomas Olmsted and Cardinal Raymond Leo Burke.

In Cardinal Burke’s “Statement on the Reception of Holy Communion by Those Who Persist in Public Grave Sin,” he wrote:

The reception of Holy Communion by those who publicly and obstinately violate the moral law in its most fundamental precepts is a particularly grave form of sacrilege. In the words of the Catechism of the Catholic Church, “Sacrilege is a grave sin especially when committed against the Eucharist, for in this sacrament the true Body of Christ is made substantially present for us” (no. 2120). It not only merits eternal punishment for the one who receives unworthily but constitutes a most serious scandal for others, that is, it leads them into the false belief that one can publicly and obstinately violate the moral law in a grave matter and still receive Our Lord in Holy Communion. A thoughtful person, before such a situation, must conclude that either the Sacred Host is not the Body of Christ or that the promotion of procured abortion, for instance, is not a grave sin.

And Bishop Olmsted wrote in Veneremur Cernui (Down in Adoration Falling): “My dear sons and daughters, Jesus our Lord and God is present to us in the Sacrament of the Eucharist in His self-offering to the Father and His merciful outpouring of love for us. Let us adore Him with ever increasing reverence!”

Olmsted echoes the words of Cardinal Burke as well, teaching his flock: “When one receives Holy Communion unworthily, the Sacrament becomes a sacrilege; the spiritual medicine becomes for that person—it is frightful to say—a form of spiritual poison. When we do not really believe in Jesus, when we do not really seek to conform our entire life to Him and receive Jesus even though we know that we have sinned against Him, then this just leads to a greater sin and betrayal.”

In our quest to heal our nation of the scourge of abortion, let us never forget that, where Catholics have lost faith in the real presence of Christ in the Eucharist, there will be no effort to condemn the crime of abortion. And since more than half of Catholics cast a vote in favor of a pro-abortion Catholic, we know how massive a challenge we are facing.

But as Bishop Olmsted wrote: “The Church has a message to bring to the streets—that of Christ’s Eucharistic presence, His victory over all evil, sin, and death—and she is enflamed with the attractive witness of love, joy, and peace.”

Let us become the messengers who proclaim the truth as we strive to defend the real presence of Christ and His babies.

To obtain a prayer card with a prayer asking that President Joe Biden will immediately stop support for all forms of abortion and infanticide and that he will respect the sanctity of the Holy Eucharist, visit the American Life League store.