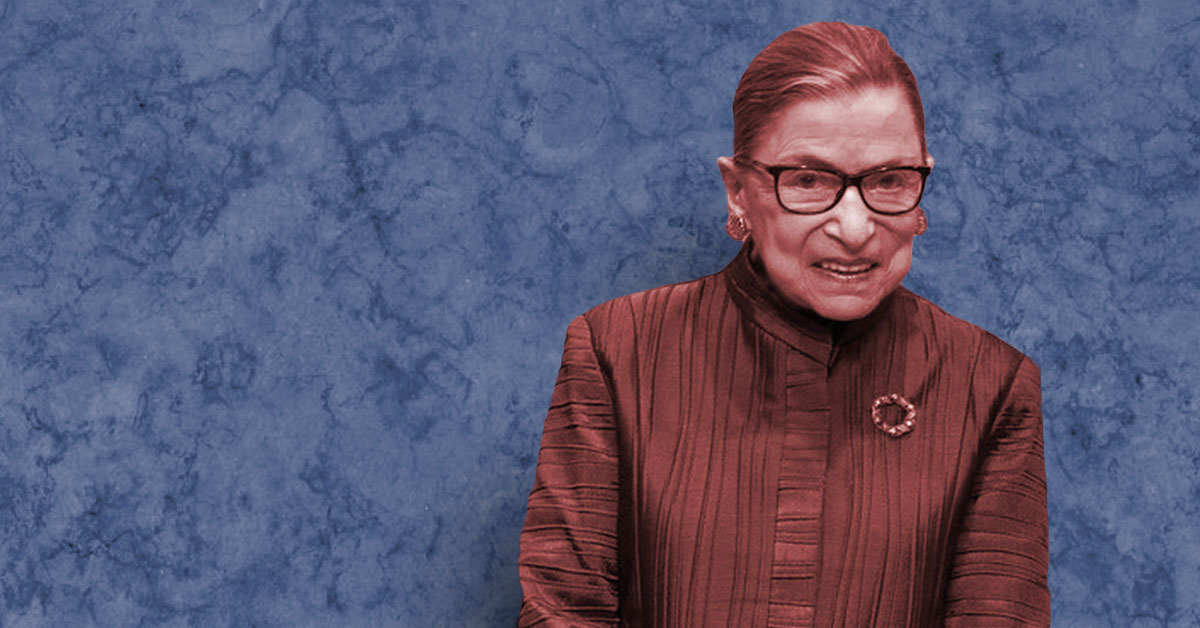 Supreme Court justice Ruth Bader Ginsburg has died, but the legacy that she leaves behind will not die. She is described as a feminist icon whose uncompromising support for abortion rights, homosexual rights, and other leftist cultural goals made her a hero for many.

In a dissenting opinion on the Box v. Planned Parenthood Supreme Court decision, Ginsburg wrote: “A woman who exercises her constitutionally protected right to terminate a pregnancy is a not a ‘mother.'”

Obviously the Ginsburg Principle of never compromising made her a woman who, whether loved or despised, always stood her ground.

One only wishes, and in fact prays, that our Catholic bishops were as stalwart in their defense of truth, especially in the heat of the battle for the presidency of the United States where a totally pro-abortion Catholic claims that his faith shapes his life.

During a vice-presidential debate a few years ago, Biden said:

My religion defines who I am. And I’ve been a practicing Catholic my whole life. And it has particularly informed my social doctrine. Catholic social doctrine talks about taking care of those who . . . can’t take care of themselves, people who need help.

With regard to abortion, I accept my church’s position . . . [that] life begins at conception. That’s the church’s judgment. I accept it in my personal life.

I do not believe that we have a right to tell other people that women . . . can’t control their body. It’s a decision between them and their doctor, in my view. And the Supreme Court—I’m not going to interfere with that.

Yet, some bishops and priests are ignoring the facts in favor of political posturing. Apparently, no amount of hypocrisy will inspire the Catholic bishops to unite with one voice to deny a counterfeit Catholic in public life access to the body and blood of Christ! Why is that?

In an interview, Jim Caviezel suggests that perhaps the bishops are pharisees. Or maybe the silence of the United States Conference of Catholic Bishops on the subject of obedience to Canon 915 is something far more insidious. Perhaps pandering to political agendas undercuts the defense of truth.

Why else would New Jersey cardinal Joseph Tobin suggest that Catholics could vote for Biden? Why would Lexington, Kentucky’s, bishop, John Stowe, say that the environment and not abortion should be the preeminent issue in this election? Why would the pastor of a Catholic parish in Dearborn, Michigan, apologize because his associate pastor gave a sermon in which he identified the violence in the streets of his city as being caused by anarchists?

Could it be that the uncompromising actions and words of the proponents of evil are slowly intimidating the leadership of our Church, shaming them into silence rather than awakening their courage to defend truth even unto death?

While we are eternally grateful for Allentown’s Bishop Alfred Schlert, who wrote that, “as voters, we must carefully examine our consciences to determine if our vote cooperates with a candidate’s promotion of the grave sins of abortion and euthanasia,” we remain convinced that the bishops as a united group with their priests and deacons have a moral obligation to make it clear that nobody in public life or otherwise can be Catholic and support abortion, euthanasia, or any threat to the lives of innocent human beings. And that, having said this, such people will be denied the Holy Eucharist.

The Ginsburg Principle of never compromising should be the hallmark of every man and woman of principle, especially those whose faith is a gift from God Himself. But sadly, we recall the words Christ spoke to each of us in Luke 16:8: “The children of this world are more astute in dealing with their own kind than are the children of light.”

To be uncompromising was a defining principle of the late Supreme Court justice. If only our Catholic leaders were as uncompromising as the exemplar of the Ginsburg Principle.