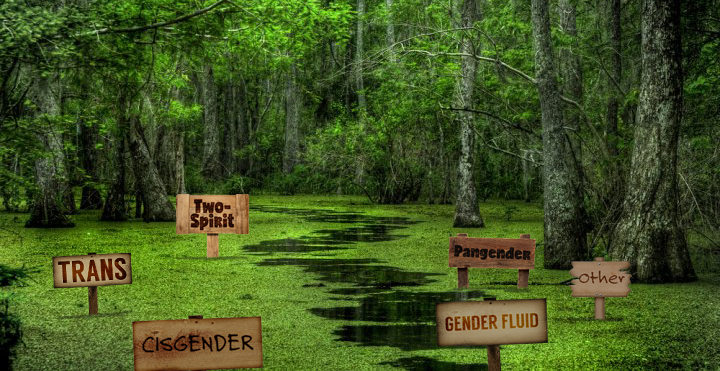 Part III in the “Draining the Swamp” series

The headline reads: “She Is Transgender. He Proposed a ‘Bathroom Bill.’ They Are Running against Each Other in Northern Virginia.”

“He” is Delegate Robert Marshall, a man who has been committed to pro-life/pro-family principles for as long as we have known him—more than 40 years.

“She” is a former “he” named Danica Roem. Danica is an ex-journalist and now a politician.

About the election, Roem recently said: “People are tired of the fact he [Marshall] is focused on discriminatory social policies instead of bread-and-butter, quality-of-life issues they face every day. . . . He is more concerned with where I go to the bathroom than where his constituents go to work. I’m running a race on improving transportation rather than ensuring discrimination.”

Or perhaps she is running to advance the agenda of the LGBTQ community? It would seem that is the case, though the media would hesitate to confess it.

Never the shy retiring one, I researched how the Catholic Church treats this latest slide into sexual anarchy, and I found an interesting insight from highly respected professor/writer Anne Hendershott from 2013. She agrees with me that the transgender question is one that faithful Catholics must address with care, honesty, and kindness. Hendershott writes:

Catholics are called to treat all—including all within the LGBT community—with compassion. Yet the Church maintains that people may not change what Pope Benedict XVI has called “their very essence.” In a speech at the Vatican last December, Pope Benedict directly addressed transgender issues by cautioning Catholics about “destroying the very essence of the human creature through manipulating their God-given gender to suit their sexual choices.” Pope Benedict warned that “when freedom to be creative becomes the freedom to create oneself, then necessarily the Maker himself is denied and ultimately man too is stripped of his dignity as a creature of God.”

And this is where I feel compelled to offer a word of common sense. Those of us who have been involved in fighting against the evils of contraception, abortion, infanticide, euthanasia, and so much more understand fully that the gift of one’s sexuality is indeed the core of our essence. We know, as Pope Benedict and most notably St. Thomas Aquinas taught, that “both men and women have the image of God by virtue of their common intellectual nature,” but each is designed by God to be unique, and most essentially complementary. And there’s the rub.

Contraception interferes with God’s design for the procreation of children. Abortion kills God’s gift of the human person given to a man and a woman. And perverting one’s sexuality by acts of same-sex or transgender surgical intervention directly contradicts God’s plan for that person and for mankind in general—for that complementarity is part of the essence He bestowed upon us.

Whether we are talking about homosexuality, transgenderism, or its progeny, the wisdom of the Church is especially helpful as we navigate the gender swamp:

In the pastoral field, these homosexuals must certainly be treated with understanding and sustained in the hope of overcoming their personal difficulties and their inability to fit into society. Their culpability will be judged with prudence. But no pastoral method can be employed which would give moral justification to these acts on the grounds that they would be consonant with the condition of such people. For according to the objective moral order, homosexual relations are acts which lack an essential and indispensable finality. In Sacred Scripture they are condemned as a serious depravity and even presented as the sad consequence of rejecting God.

We must never judge. We must love and teach God’s truth with love and patience, never conforming to what society wants us to believe. And we must address such people and their challenges with the love and mercy of God’s will for the human person as designed by and shepherded by Him, for only in Him can we ever hope to end the confusion created in the gender swamp.

Join American Life League as we work to cure this toxic pathology by teaching truth with our Culture of Life Studies Program, by showing others how to live it with our Life Defenders program, and by arming others for battle with our Stop Planned Parenthood International program.