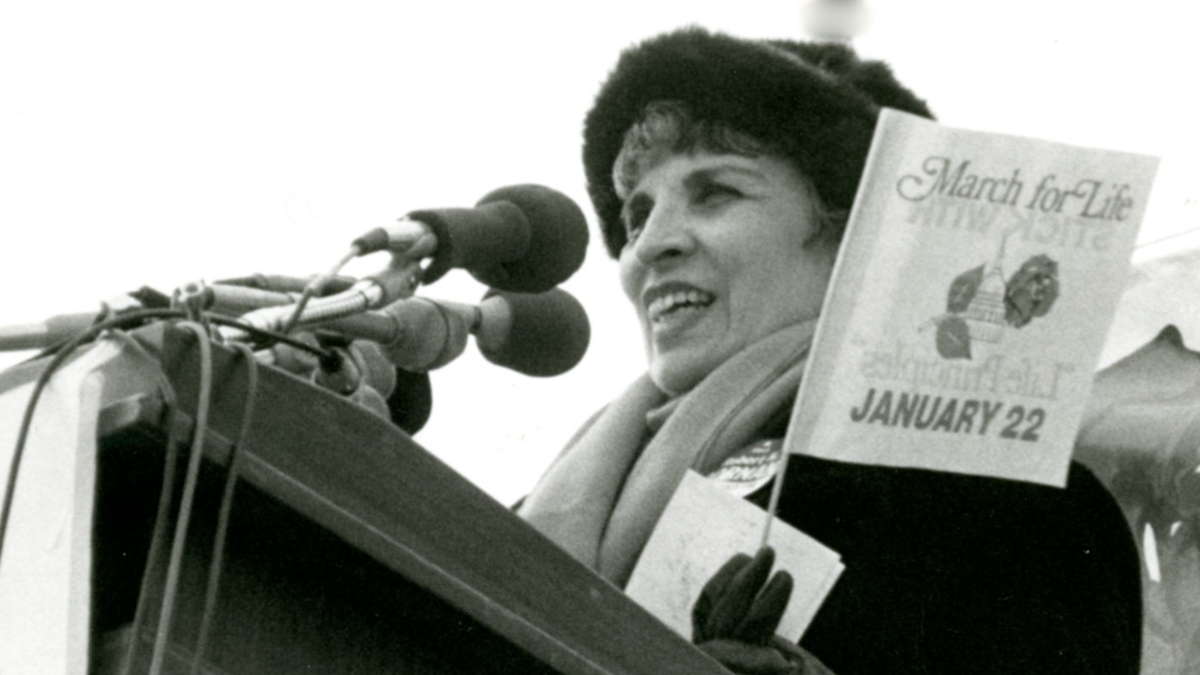 On the eve of the 46th annual March for Life, it is only fitting to remember the brave, committed woman who started the event.

In the wake of the US Supreme Court’s tragic decisions Roe v. Wade and Doe v. Bolton of January 22, 1973, accomplished attorney Nellie Gray reacted with indignation and a will to take action. Gray was a Catholic convert who had served our country during World War II as a corporal in the Women’s Army Corps. She later graduated from Georgetown Law School and was employed by the State and Labor Departments prior to the Supreme Court decisions that altered the course of her life from that day forward.

Reeling from the 1973 decisions and recognizing the need to mobilize grassroots people to defend the babies, Nellie launched the March for Life Committee on January 22, 1974. The organization was officially incorporated with a board of directors with Nellie at the helm.

Nellie changed my perspective with a single speech on the evening before the 1975 March for Life. I attended a conference at which she was the keynote speaker. As soon as she explained why the personhood of the preborn baby had to be the common goal of our pro-life work, I knew I had heard the truth. It was clear that personhood for every individual human being was the right way to approach what is, on its face, a tragedy so vast in scope that it is beyond our human imagination.

For Nellie Gray and the March for Life Committee, the focus was on the “Life Principles” which were the mantra of everything the March for Life represented. Nellie’s courageous and determined efforts to work for the restoration of a right that our founding fathers took for granted irked many in the pro-life movement over the years, but she persisted. She said on many occasions that what the founders wrote in The Declaration of Independence must not be abandoned:

“We hold these truths to be self-evident, that all men are created equal, that they are endowed by their Creator with certain unalienable Rights, that among these are Life, Liberty and the pursuit of Happiness.”

Human personhood is not a new idea, but for Nellie it became the bedrock of all her work, including the hoped-for passage of the Paramount Human Life Amendment. That too was simple and straightforward: “The paramount right to life is vested in each human being from the moment of fertilization without regard to age, health or condition of dependency.”

In subsequent years we realized that the word “fertilization” was no longer adequate. Today we would replace that with biological beginning because of dramatic scientific changes, including in vitro fertilization and human cloning, both of which lack the recognition that only God can create human beings.

Even so, the basic thrust of the 25 words contained in the Paramount HLA encapsulates all that the pro-life movement should be striving to achieve—100 percent protection for every innocent baby prior to birth, nothing more and nothing less.

Nellie never surrendered to political compromise. She knew that to approve even one abortion in the law or the culture was to lose the battle. She always said that either we work to protect them all or we betray them all because a little bit of abortion is a lie. She set the standard and she never wavered.

Nellie Gray died in 2012, but the principles she held so dear remain.

Today we express gratitude to God for Nellie Gray’s legacy as we continue to work toward achieving total protection for every innocent human being, born and preborn.

Please pray for the happy repose of Nellie Gray’s soul.

May her soul and the souls of all the faithful departed rest in peace. Amen.

If you would like to educate your children, grandchildren, students, or youth group about this amazing woman, visit the Culture of Life Studies Program’s website for a lesson that will teach them how one person CAN make a difference. Entitled The Power of One: Nellie Gray and the March for Life, this lesson will help you make a difference in your child’s life.