Q & A with Abby Johnson: Former Planned Parenthood Director Saves Abortion Workers through And Then There Were None Ministry and ‘Unplanned’ Movie

Home . Publications . Q & A with Abby Johnson: Former Planned Parenthood Director Saves Abortion Workers through And Then There Were None Ministry and ‘Unplanned’ Movie 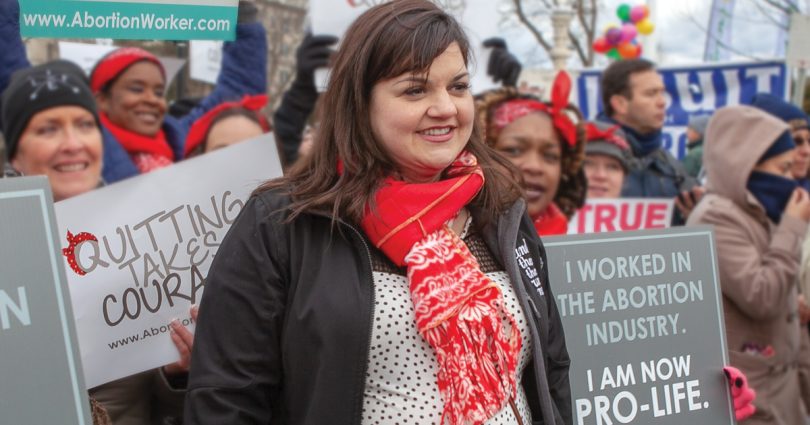 Q & A with Abby Johnson: Former Planned Parenthood Director Saves Abortion Workers through And Then There Were None Ministry and ‘Unplanned’ Movie

During the filming of Unplanned, Johnson shared some insight with journalists visiting the set:

A lot of people have asked, “How is it, Abby, that you went from this good Christian kid to being someone who ran an abortion clinic?” My only answer to that is it happened just a little bit at a time. That’s generally the way that sin works in our lives. It’s one little compromise at a time. Sin can turn you into someone you don’t even recognize anymore.

In 2009, Johnson was asked to assist with the abortion of a 13-week preborn baby. After witnessing the ultrasound of the baby boy fighting for his life, she knew she could no longer work at Planned Parenthood. “I had seen two things that I knew to be true—that there was humanity in the womb and that abortion was taking an individual human being’s life,” she says.

Johnson was scared to leave Planned Parenthood, as she had been there for eight years. All of her friends were a part of Planned Parenthood or the abortion industry and she would have to give up a substantial paycheck. She didn’t know where to turn, but then she remembered the people praying on the sidewalk.

“They were always saying to me, ‘Abby, if you ever want to leave your job, we’ll help you.’ I never thought I would take them up on that offer,” she shares.

In a panic—after watching the baby boy being aborted—Johnson recalls sitting on the couch in the Coalition for Life office. She explains how she prayed and said:

“God, I don’t know how to keep going on with this burden.” I remember hearing from the Lord, hearing Him gently saying, “You know, nothing you will ever do will make up for what you have done.” That was a hard reality to grasp, but I also heard from Him that because of His Divine Mercy—because of His radical grace and forgiveness—He was ready to say that it’s finished. I had to move forward in that faith.

Johnson felt called to do more than write a book; she hoped to provide support and aid to abortion workers who desired to leave the industry. In 2012, she made that dream a reality when she founded And Then There Were None. When she first began the ministry, people in the pro-life movement thought she was crazy and told her that no abortion worker would seek help. “[They acted] as if these people were too far beyond the grace of God, but I knew better,” she says.

Johnson, a mother of seven, talked to Celebrate Life Magazine about ATTWN and how it has successfully led over 430 abortion workers—including seven abortionists—out of the business, and she shared some thoughts on the Unplanned movie.

In what ways do you assist abortion workers in leaving the industry?

ATTWN provides a safety net for workers wanting to leave the abortion industry, including financial support, employment services, job recruitment, and legal and emotional support. We provide an entire community of former abortion workers who understand each other because they have all been through similar experiences.

How are you reaching the abortion workers?

We stand on the sidewalk outside of abortion clinics and talk to the workers, telling them they have another option—that we can help them leave. We put up billboards across the country with information about ATTWN. We send flowers and handwritten cards into abortion clinics. We pray.

We have also had several workers leave abortion clinics and take many of their coworkers with them, shutting down the clinic until they can hire more people!

When you began ATTWN, you hoped to have 12 abortion workers per year leave the business. Over the last five years you’ve had 430 leave. How are you able to get the resources to help so many?

Don’t underestimate God. His hand has guided this ministry from the beginning. We have had so many generous donors and volunteers who have helped to build the ministry and build it quickly. We have a prayer team as well that prays for our needs. All the glory goes to God for this ministry.

Do you think that leaving the abortion business is more difficult than leaving other jobs?

It’s hard to leave a job if you have good relationships with your coworkers and make a lot of money. Those were two of the reasons I found it hard to leave Planned Parenthood. I think it depends on each particular situation. However, in the abortion industry, death is a constant, which can really dig into your soul and take you captive or push you out of there. We need a lot of prayer for abortion workers.

Has it been difficult to place abortion workers in new jobs?

We have an experienced team of job searchers on our staff who have connections all around the country with medical offices, doctors, and any number of other businesses that are happy to hire someone who used to work in the abortion industry if they are experienced and skilled. We are always looking for more connections with these kinds of businesses.

Many of our workers are skilled and experienced and still have the same desire to help women as they did when they started at the abortion clinic, but now it’s been redirected to a life-giving service.

However, we also have former abortion workers who have a more challenging time finding work because they were working in positions they were not qualified to be doing. For example, one former worker who only finished eighth grade was performing ultrasounds where she worked. It certainly takes grace and counseling to help the client come to the realization that she will not be able to do the same job for the same pay. But these former workers are achievers and are willing to work hard to find another job.

Is your ministry made up of staff and volunteers?

Yes, we have both. We have a small paid staff and most of our client managers are volunteers with training in crisis management. We also have interns and other volunteers who help make our ministry successful.

Are many of your staff and volunteers former abortion workers?

Some of them are, like myself, and some have had abortions. Others are clinically trained counselors. We all have a lot of love for abortion workers and strive to be compassionate, caring, and nonjudgmental.

You’ve said that you want to love abortion workers right out of the clinic. Will you talk more about what this means?

When I was working in Planned Parenthood, it was a kind sidewalk counselor who helped get me out because she loved me. But I had many, many other people in the pro-life movement scream and yell at me and threaten my family. They sent me nasty letters. I didn’t leave because of them. I left because someone cared enough to love me out of Planned Parenthood, and that’s what we do at ATTWN. We love abortion workers so much and strive to put the love of Christ into action through this ministry. That’s how we are going to end abortion—through love.

Are most of the former workers open to inviting Christ into their lives?

Yes, many are Christians already and have either fallen away from their faith or thought they were doing the right thing working in the abortion clinic. Many of our former workers reunite with Christ when they leave their jobs and it’s a beautiful thing to witness.

Are most of the workers who leave Planned Parenthood employees?

Since Planned Parenthood is the largest abortion vendor in the country, we do have a lot of former workers from those clinics. But we also have hundreds from other clinics in the nation as well. We’ll take abortion workers from any abortion clinic and help them find new jobs.

When workers come to you for help, how many of them know about you or are familiar with your story?

Many are not familiar with my story. They just want to get out and saw someone on the sidewalk offering them help or got one of our cards or got flowers or saw a billboard. Maybe they heard me on the radio or heard about ATTWN from a former coworker. It’s not about me; it’s about making abortion unthinkable and closing abortion clinics from the inside out through love.

Did you ever expect Unplanned to be turned into a movie?

One time after the book came out, I was talking to a pro-life person who said, “It would be cool if your book is turned into a movie, but it will never happen because no one wants to touch that, and no one would go see the film.” Look what God is doing right now! I feel like twice in my life I’ve had people say to me that this ministry isn’t going to matter, but it’s mattered to the 400-plus abortion workers who have left and who now are in a relationship with Christ and are living healthier lives.

Unplanned is not just my story; it’s the story of all of you who have been fighting in the pro-life movement. I believe this film will be one of the things that will work to make abortion unthinkable—and not just because it’s about my book.

Did you have any reservations about having your life portrayed on the big screen?

I was excited about it, but I did have a moment where I thought, “Oh my goodness, this will make me more vulnerable than I have ever been.”

What was it like to be on the set of the Unplanned movie? Did the producers get it right?

When I first walked on set, I thought it had a good feel to it. It had the feel of how my clinic looked, and it was laid out the same—especially the long hallway with doors on either side. Many people who support abortion are women and men who have been involved in abortion. It was crucial that this film be an accurate account of what abortion is and what an abortion facility looks like.

Do you fear the backlash from Planned Parenthood?

I hope that they are just steaming mad about it, and I hope they give us all kinds of publicity. I hope they talk about what a terrible film it is and give it as much media attention as possible. The more they advertise for this film, the more of their people and their supporters will go to see it. I believe walking in there as a critic could be a first step to their conversion.

Lori Hadacek Chaplin writes from Idaho. She is a senior writer for Catholic Digest and writes a blog entitled Everyday Miracles, which can be found at catholicdigest.com/category/news/everyday-miracles/.

This article, and others like it, can be found at clmagazine.org.