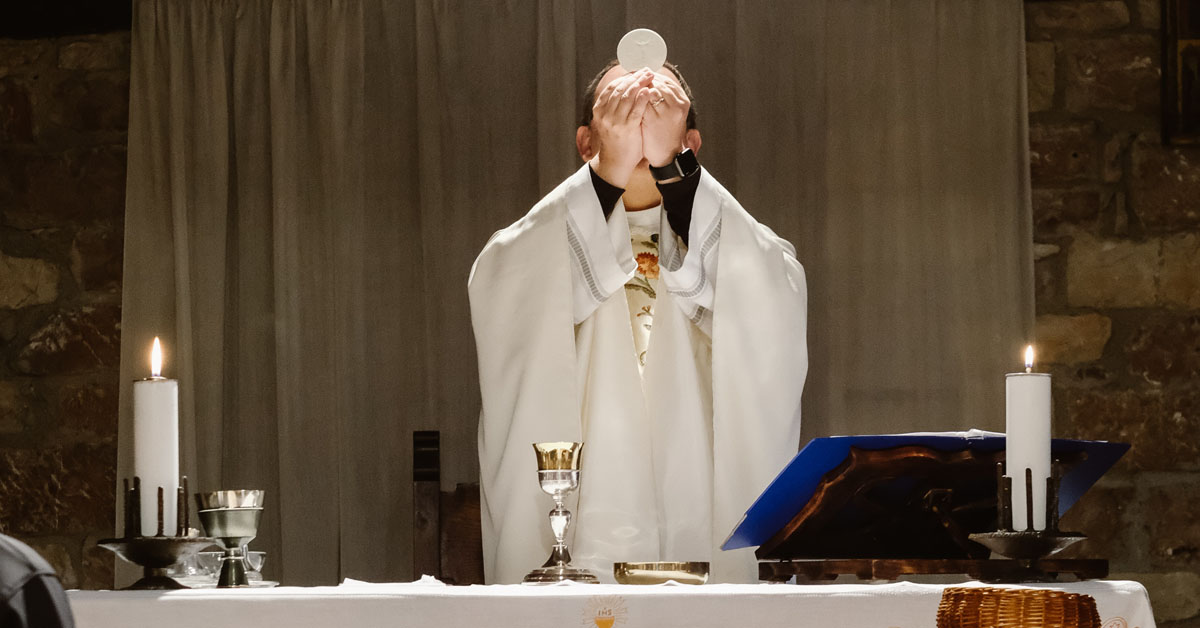 Catholic bishops, for the most part, seem to be unfamiliar with the difference between profaning the body of Christ in the Eucharist and being coherent in a policy that defends and protects Him from sacrilege.

We know that to profane means to “treat (something sacred) with abuse, irreverence, or contempt.”

On the other hand, the bishops say they are pursuing a coherent policy on the Eucharist, which suggests that there is no unity among them when it comes to the question of defending and protecting the body of Christ from those who defiantly profane the sacrament.

To make this point in real time, we need look no further than the Diocese of Albany, New York, where Bishop Edward Scharfenberger’s spokeswoman recently told the Times-Union newspaper: “He doesn’t want to politicize the Eucharist. It’s too important and sacred to us to turn into a political football.”

We conclude from this statement that, where we see pro-abortion Catholics in public life who receive the Eucharist as profaning the body of Christ, some bishops do not. Such a position is not coherent; it is political. To my mind, this position is scandalous. But don’t take my word for it.

Read the words of Cardinal Raymond Burke, who is a shepherd and a canon lawyer:

It is sometimes said that the denial of Holy Communion to politicians who obstinately persevere in grave sin is the use of Holy Communion by the Church for political purposes. On the contrary, it is the Church’s solemn responsibility to safeguard the holiness of the Holy Eucharist, to prevent the faithful from committing sacrilege, and to prevent scandal among the faithful and other persons of good will.

It is rather the Catholic politician, who publicly and obstinately promotes what is contrary to the moral law and yet dares to receive sacrilegiously Holy Communion, who uses the Holy Eucharist for political purposes. In other words, the politician presents himself or herself as a devout Catholic, while the truth is completely otherwise.

And so it is that we ask why the United States Conference of Catholic Bishops cannot concur with these simple words, be coherent in this position as a united group of shepherds, and make it clear that profaning the body of Christ is a sinful act. Why do they tarry?

Do they not know that the Catechism of the Catholic Church teaches on the subject of receiving the body of Christ? It states:

We must prepare ourselves for so great and so holy a moment. St. Paul urges us to examine our conscience: “Whoever, therefore, eats the bread or drinks the cup of the Lord in an unworthy manner will be guilty of profaning the body and blood of the Lord. Let a man examine himself, and so eat of the bread and drink of the cup. For any one who eats and drinks without discerning the body eats and drinks judgment upon himself.” Anyone conscious of a grave sin must receive the sacrament of Reconciliation before coming to communion.

Have our bishops forgotten the 2004 teaching of Cardinal Joseph Ratzinger? In his memo to the United States Catholic bishops, Ratzinger wrote that when efforts to privately teach the errant public sinner that he or she must not present himself for Communion, “and the person in question, with obstinate persistence, still presents himself to receive the Holy Eucharist, ‘the minister of Holy Communion must refuse to distribute it’ (cf. Pontifical Council for Legislative Texts Declaration “Holy Communion and Divorced, Civilly Remarried Catholics” [2002], nos. 3-4). This decision, properly speaking, is not a sanction or a penalty. Nor is the minister of Holy Communion passing judgment on the person’s subjective guilt, but rather is reacting to the person’s public unworthiness to receive Holy Communion due to an objective situation of sin.”

These are not political statements. They are statements of truth.

Ryan Anderson of the Ethics and Public Policy Center pointed to statements by Pope Francis saying that the Eucharist “is not a prize for the perfect but a powerful medicine and nourishment for the weak,” and asked: “But what if ‘the weak’ deliberately champion their sin and relish confrontation with Christ’s chosen shepherds? The Eucharist is meant to help heal sinners, but that requires repentance.”

Repentance is not political; it is a sign of humility before God for having offended Him by sinning. It should be reason enough for bishops to call defiant Catholics in public life to repentance as well.

The sad truth is before us. We are witnessing consistent profaning of the body of Christ with no coherence to a truth that is neither debatable nor that needs clarification. Rather, this truth is at the root of everything it means to be Catholic.

The recipe for healing is clear. By cohering to truth, the bishops can end the profaning. So why dally?