In Missouri, after weeks of stalling, Judge Michael Stelzer handed a victory to Planned Parenthood and a death sentence to many babies. He ruled this past Monday that Reproductive Health Services of Planned Parenthood of the St. Louis Region can keep killing babies through abortion until a lawsuit filed by Planned Parenthood against the state of Missouri is settled. Planned Parenthood’s license to do abortions expired on May 31, but the judge has kept the flow of dead bodies going as the state continues to try to shut down this facility that has sent at least 74 women to hospitals. The judge did not like the fact that the state simply let the old license expire and refuses to issue a new one. He wants the state to formally refuse a new license and state why. Judge Stelzer’s order says that the state shall issue a decision on Planned Parenthood’s application for renewal of its license no later than June 21.

Children in grades K-12 are under fire in North Dakota. Planned Parenthood has never had a medical facility in the state, but it has, for years, operated an educational office in the state. In the last few weeks, it’s been revealed that North Dakota State University and Planned Parenthood have teamed up for the second year to offer kindergarten through high school teachers credit for a course that will “promote healthy sexuality and relationships among the youth they serve.” When news of this contract became public knowledge last year, there was a public outcry. NDSU paid Planned Parenthood provider more than $165,000 in 2018. Now, it has been revealed that NDSU is, once again, paying Planned Parenthood to conduct this training which, as we know, does nothing more than train teachers to sell a lifestyle to impressionable kids that will put their immortal souls in danger.

The abortion industry wants everyone in the United States to do what it says—even if that violates his or her strongly held beliefs. Reuters News Service reported this week: “Planned Parenthood and other nonprofits offering family planning services sued the Trump administration on Tuesday to block a new federal rule letting healthcare workers refuse abortions and other services because of religious or moral objections. The two lawsuits filed in Manhattan federal court said enforcing the ‘conscience’ rule would encourage discrimination against women, minorities, the poor, the uninsured, and lesbian, gay, bisexual, transgender and queer people by curbing access to legal healthcare procedures, including life-saving treatments.” What the new rules actually do is allow medical professionals and others to decide for themselves what activities they will or will not participate in. It’s called religious freedom and is one of the basics on which America was founded. Currently, the new rules will go into effect on July 22.

This week, Texas governor Greg Abbott signed a new law that prohibits any municipalities in the state from partnering with any abortion providers, including Planned Parenthood. According to USSA News, “The new law, which goes into effect on September 1, specifically prevents local governments from entering into reduced tax and lease agreements with such organizations. It also prevents cities and counties from advocacy or lobbying on behalf of the interests of an abortion provider or affiliate. It’s now against the law in Texas for local governments, school districts, and other public entities, to enter into any contracts with groups that kill unborn babies. Pro-life taxpayers don’t want to pay for abortions directly or indirectly.” The bill was inspired by the situation in Austin, TX, where Planned Parenthood of Greater Texas (PPGT) currently has a 20-year lease on a 3,720 square foot clinic space and is paying the city just $1 a year. Incredibly, PPGT reported a profit of over $5 million last year and $3 million the year before. Although this law will not nullify the existing lease, it will prevent any new agreements after it goes into effect on September 1, 2019.

ALL in the News – Joe Biden is Satan’s Secret Weapon; Pinterest targets ALL and Live Action

Last week’s Miley Cyrus abortion cake fiasco stirred up a lot of people on both sides of the abortion debate. Judie’s comments on the matter reached thousands of people and were featured in two global outlets linked here and here.

Earlier this week, Live Action took to Twitter to express their indignation at their organization being banned from Pinterest. The pro-life group was labeled as pornographic and barred from the site. A similar situation happened to the American Life League back in the fall of 2018. Our Pinterest page was suspended and labeled as spam. This topic was the subject of wide discussion in the media this week, appearing in at least six articles. ALL’s digital creator, Dwain Currier, was interviewed in this Church Militant article. Similar articles appeared on WND, Twitchy, Christian Post, CBN, and MRCTV.

Jim Sedlak’s Pro-Life Activism from Creation to Death is a weekly talk-radio program on the Radio Maria USA network.  The show can be heard live every Friday at noon (Eastern Time) and is repeated on Saturdays (10 PM) and Mondays (10 PM).

On June 7, 1965, in its Griswold v. Connecticut decision, the Supreme Court struck down prohibitions against the use of birth control. The court engineered a right to privacy as existing in the shadows of the US Constitution. Thus began the darkest era in all of human history.

To understand the catastrophic effects contraception has on the human body, Dr. Angela Lanfranchi provides a riveting presentation on the scientific proof of how the birth control pill kills.

Action Item of the Week – Every summer, numerous young people join together and walk across America for life

The walks are sponsored by Crossroads. Crossroads was founded in 1995 by Steve Sanborn, a student at Franciscan University of Steubenville. The mission of Crossroads is to respond to Pope St. John Paul II’s call to the youth of the world to take an active role in the pro-life movement in order to establish a Culture of Life. In answer to that call, Crossroads conducts annual pro-life pilgrimages across the United States. This summer, young adults will walk on two simultaneous pro-life walks across America from San Francisco and Los Angeles to Washington, DC. Walking almost 7,000 miles, these young people hope to convert the hearts and minds of others—at the grass-roots level—by witnessing to the dignity and sanctity of all human life, from the moment of conception to natural death.

While walking, Crossroads participants join their efforts, prayers and small sacrifices with the sufferings of Christ—crucified for the sake of all, born and unborn. They also speak to parish groups to encourage pro-life activism in their communities and actively participate in radio, television and newspaper interviews with local media as well as many religious media outlets. During the walk, they stop at local abortion clinics along the route to participate in prayerful, peaceful protests and to counsel women in crisis pregnancies to help them choose life for their unborn child.

This summer, there is a Central walk that began in San Francisco on May 18 and a Southern walk that began in Los Angeles the same day. They are in a different city every day and the full, day-by-day schedule can be viewed on their website.

The walks wrap up on August 10 with a rally in Washington, DC. Listed below are the locations where the walkers will be each weekend from now until August 10. Please visit with them when they are in your area and let them know how much their sacrifice of time and sore muscles mean to you.

READ >>  Planned Parenthood Admits Plan B Is a Failure

Women’s rights begin in the womb! Very special collab with moms who’ve chosen life. Like if you believe in healthcare for ALL – including the preborn. #EmpoweredWomenEmpowerWomen #StrongWomenStartAsStrongGirls #ProLove #ProWoman #ProLife #MileysMomChoseLife #BabyCharlee pic.twitter.com/MBJkeZQzqL

Peace begins in the womb! pic.twitter.com/wjGSlAnabx

It begins in the womb, long before the naked eye can appreciate its magnificence. pic.twitter.com/xO8ikPrSiP

Most pro-lifers argue that “life begins at conception.” That is, at his biological beginning, a newly created human being comes into existence. However, his existence doesn’t begin in the womb. He begins where most of us began—in the fallopian tube of our mothers (or, in rare cases, the bright rooms of IVF and experimental labs).

The illustration below will help dispel the myth that anything related to the rights of the preborn child begin in the womb. 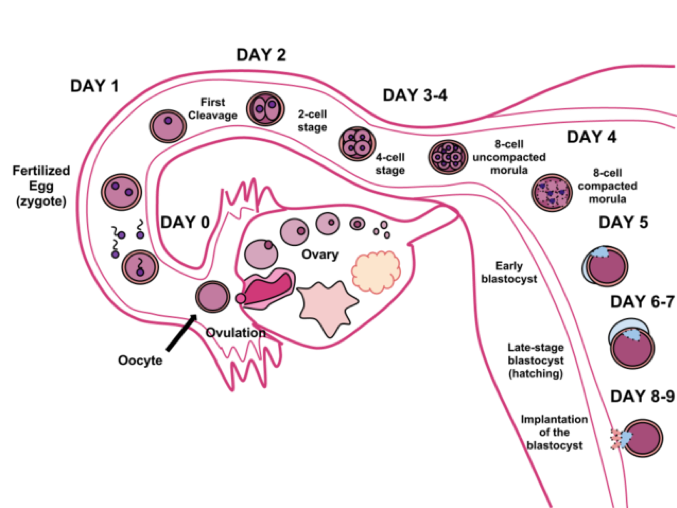 So why is that pro-life people even suggest anything begins in the womb? Perhaps it goes back to the first chapter of prophet Jeremiah in the Old Testament:

In a poetic way, Jeremiah was referring to God’s love for man. He wasn’t giving us a lesson on human embryology. Let’s be pro-active pro-lifers and correct the record every time we see this phrase. If we’re truly committed to protecting the most vulnerable among us, shouldn’t that include the single-cell human prior to his implantation in his mother’s womb?