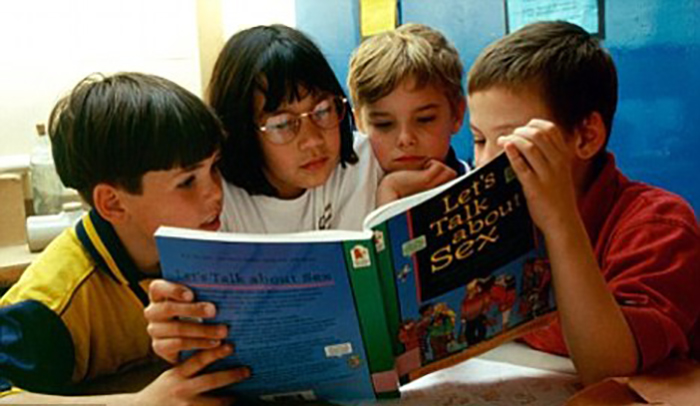 The world tells us that we need to give our children comprehensive sexuality education. What they mean is to instruct our children in the mechanics of engaging in foreplay, sexually deviant activities, and intercourse. Have you ever heard the defeatist cry, “Teenagers are going to have sex; you can’t stop that!”? Well, that is exactly what Planned Parenthood wants to happen.

In 2002, Planned Parenthood issued an “Oregon Team Report” on its success in changing the culture in Europe. The summary of the report said: “Success doesn’t really rest on programs and services alone. It is the societal thinking—the norms—that makes the Dutch, French, and German successes possible. It is the openness and the acceptance that young people will have intimate sexual relationships without being married and that these relationships are natural and contribute to maturing into a sexually healthy adult.”

Of course, the Apostle Paul did not agree with this. He said, “Avoid immorality. Every other sin a person commits is outside the body, but the immoral person sins against his own body” (1 Corinthians 6:18). Paul was describing sexual sins as being among the worst kind of sins.

So, what are Christians to do? Well, what we can’t do is abandon our children. We cannot abdicate our God-given role as parents.

We can start by making sure our children go to church on a weekly basis. Back in the 1990s, Planned Parenthood commissioned a survey on what was the biggest predictor of a teenager not experiencing a surprise pregnancy. PP wanted the results to show that the answer was sex education in school. If that had been the answer, it would have used that to really ramp up the push for universal sex ed. Well, according to reports published at the time, the answer to the survey was weekly church attendance. Planned Parenthood immediately put a lid on the results, but it showed what was really important.

In that same “Oregon Team Report” mentioned earlier, Planned Parenthood documented that, while it was changing European society values, weekly church attendance among youth 15-19 years old fell from 70 percent to less than 10 percent. Of course! If you like what Planned Parenthood is telling you, you don’t want to go to church and hear God’s word.

We must instill virtues in our children. Virtues like purity, chastity, modesty, and self-control are just a few of the significant ones that will help our children navigate the waters filled with sexual sin and arrive in adulthood still in love with and faithful to God.

We cannot forget God’s commandments—the 10 laws by which He expects us all to live. His first commandment is that He is God, and we cannot have any gods but Him. Yet, Planned Parenthood—and society as a whole—tries to get our kids to worship sex. To Planned Parenthood, sex is its god. Finding new and more dangerous ways to engage in sexual activities is what it advocates and has led to major motion pictures glorifying deviant sexual behavior. And our kids see it as entertainment!

What about the commandment not to commit adultery, which, of course, means not having sexual relations with anyone except the person to whom you are married? Do any movie or television producers even remember this anymore? Parents should never let their children watch or comment on any video without mentioning the sinful nature of the activity portrayed. Oh, you’ll get rolling eyes or some “Oh, Mom” or “Oh, Dad” comments, but it’s your job to give them the truth.

READ >>  The Purpose of School in a One-World Government

Then, clearly, there are the sacraments. Marriage comes to mind. Do your kids even consider this as a state of life for which to strive? How about Communion or penance?

Yes, in today’s society, our children have a lot to contend with. But parents need to remember that God has put them in a position to influence their children. Make no mistake: What you do, or don’t do, will influence your children.

You may be hesitant to stand up and fight against the sexuality education programs of our day, but you know God wants you to do it. You can also be sure that what you choose to do in this battle will greatly influence your children—and their values—for life.

Let us pray that we all have the stamina to influence our children for good and not just abandon them to the sexualized world of Planned Parenthood.