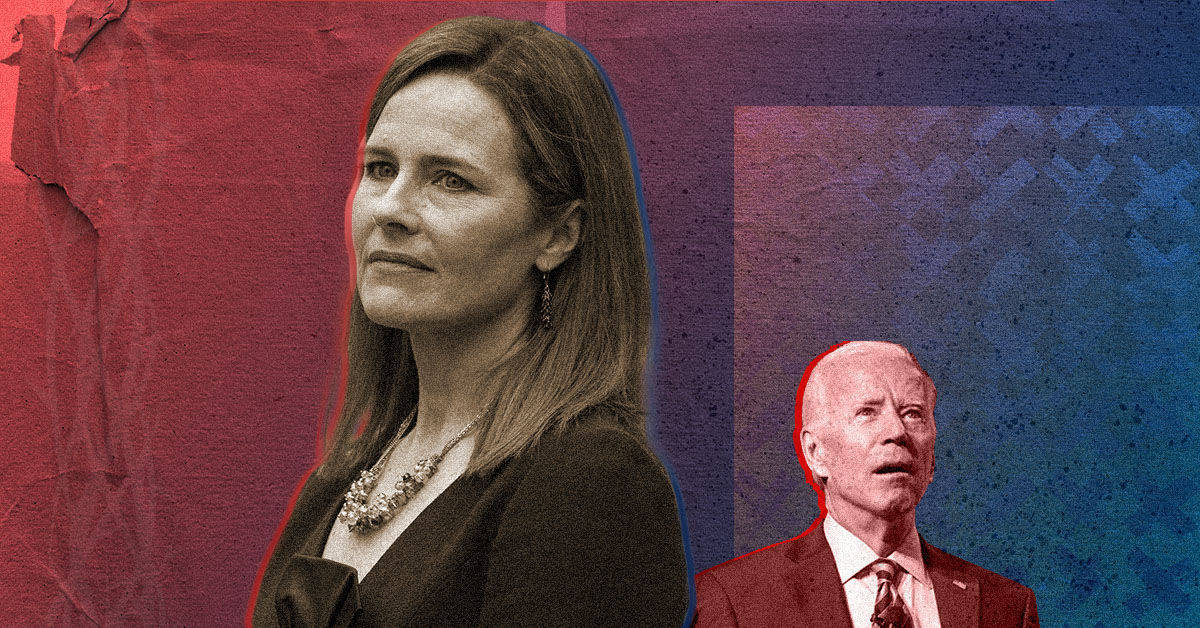 Declan Leary writes: “Joe Biden is the perfect representative of the mainstream current of American Catholicism. He’s a squish who prioritizes the temporal and sentimental over the eternal and the sacred. Sooner or later, we’ll have to reckon with that fact.”

So true. And in that reckoning we need look no further than Judge Amy Coney Barrett to see a Catholic who is, in her own words, “faithful,” and in her life a practitioner of that faith.

Barrett’s life, not the cheap political posturing employed by Biden, teaches us that faith is a matter of example, not words, a matter of actions, not slogans. Recall the time when “Barrett was pressed about whether she considers herself an orthodox Catholic.”

As Brian Jones points out:

This is the central question, not just for her, but for our entire political and social order. Perhaps it will provoke us to reconsider the degree to which orthodox Catholicism can truly be tolerated in modern liberal democracies. The argument that needs to be heard, for the health of both religion and politics, insists that the things of Caesar and those of God are not the same. For Barrett, this teaching is at the heart of the Catholic faith, and it is thankfully a dogma that lives loudly within her.

Archbishop Charles Chaput, who wrote an entire book on that topic, took note of Senator Feinstein’s disdain regarding Barrett’s faith. In his wisdom, he explains: “Ms. Barrett’s life story suggests that she actually believes and seeks to live what her Catholic faith teaches. Worse, she has a superb intellect, a deep grasp of the law, and an excellent record as a jurist. In other words, she’s a nightmare for a certain kind of political tribe.”

This tribe represents acceptance of the American Catholicism of the Biden strain while detesting everything that Catholics like Barrett represent. The Biden clan embraces the politics of religion while rejecting living faith in Christ.

But Biden continues to be exposed for his hypocrisy. Cardinal Raymond Burke recently said that Biden “is not a Catholic in good standing and he should not approach to receive Holy Communion.”

Comparing Biden and Barrett may seem to some to be an insult to Barrett, but it is not. Rather, it is a lesson for every person who identifies himself as Catholic and yet finds it acceptable to support the very sins that offend God to the point of violating His commandments.

We as a Church are failing to operate in the political world because we are failing in the formation of our own. Our faith has become a cultural vestige to tout on the campaign trail and at Christmas. Any attempt to reform that unfortunate state of affairs should begin with the center of a proper Catholic culture: “the Bible, the beatitudes, the Ten Commandments, the sacraments,” and “the prayers.” These things have the power to transform us, and through us to transform the world.

Archbishop Samuel Aquila calls us to heed those words: “Catholics and other people of faith are singled out for derision and sometimes physical violence. For the sake of our Church and our society, we must respond by defending the right to religious freedom, both when we vote and through our own personal witness.”

Yes, it is the personal witness of women like Barrett who shine the light on the path every Catholic must take in our quest to help the misguided Bidens of the world by praying for them as we raise prayers of praise for the heroic Catholics of our day who live in the light of Christ.

Barrett, unlike Biden, has no need to cheapen her Catholic identity by politicizing it. She is and lives Catholic, thanks be to God.