The barbarians in this case are those who raised voices of protest immediately after the US Supreme Court ruled in a recent pro-life pregnancy center case. The case in point, National Institute of Family and Life Advocates (NIFLA) v. Becerra, Attorney General of California, dealt with the fundamental question of whether or not the state of California could require pro-life pregnancy care centers to provide information to women about the availability of abortion.

In the Supreme Court majority opinion, Justice Clarence Thomas wrote that the state cannot force a licensed pregnancy center to violate its first amendment rights by referring an expectant mother for an abortion.

Michael Farris, one of the attorneys representing NIFLA, a national network of 1,450 pro-life centers, pointed out: “No one should be forced by the government to express a message that violates their convictions, especially on deeply divisive subjects such as abortion. In this case, the government used its power to force pro-life pregnancy centers to provide free advertising for abortion.”

But the pro-aborts are having none of it! Let’s take a peek at how these barbarians, who support slicing and dicing babies for profit, are reacting.

Their voice in Congress, former speaker of the House, Nancy Pelosi, said: “Today’s decision is a grave step backwards in our nation’s fight to protect and advance the rights of women and opens the door for anti-choice activists to deceive and prey on vulnerable women seeking complete, accurate and unbiased information critical to their health and well-being.”

Unpack these words and you will learn that this proclaimed Catholic—Pelosi—believes that killing the preborn children of expectant mothers is a right protected at all costs. She characterizes those who welcome the mother and her child with open arms and help of every kind as people who “deceive and prey” women! We can presume from Pelosi’s statement that killing preborn children is good and saving them is not so good. What a hypocrite!

READ >>  The Pope and Obama Seeds of Good and Evil 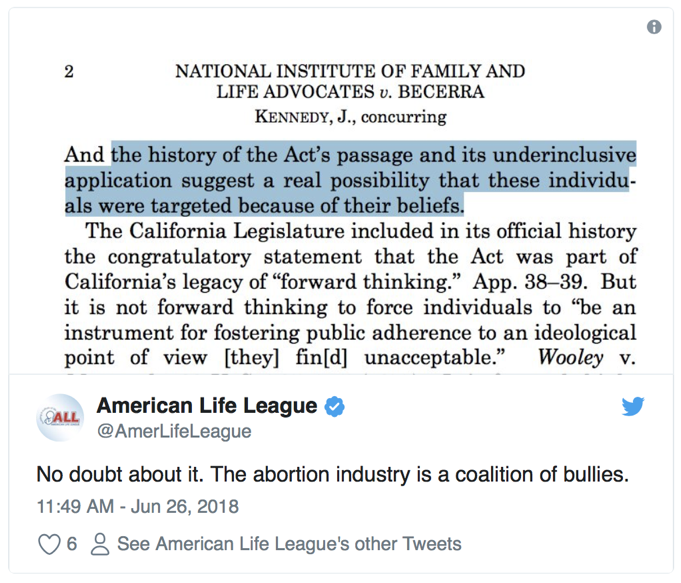 Then there’s America’s abortion giant, Planned Parenthood, reacting with this: “Let’s be clear: fake women’s health centers are deceptive and harmful to women—lying to women, withholding medical information, and cutting off access to care. Nothing in this SCOTUS decision suggests otherwise.”’

Again, it’s all about the abortion dollars they will not rake in when compassion replaces recommendations for the big abortion that robs a baby of his life and a mother of her motherhood. There is nothing at all pro-woman about that, no matter how many abortion apologists are quoted or how many fanatics claim otherwise.

This is a time to celebrate clear thinking and to realize that what the Supreme Court ruled is narrow in scope but a huge step forward for recognizing the rights of those who work in pregnancy care centers to be who they say they are and not what abortion profiteers want them to be.

The only fake in this story is the marketer of abortion who lies to the baby’s mom while wielding a knife or prescribing a drug to kill a preborn child.

We should never forget these words of St. John Paul II, who wrote in the Gospel of Life that this deadly act of abortion attributes “to human freedom a perverse and evil significance: that of an absolute power over others and against others. This is the death of true freedom.”

This is so because, as Christ taught (John 8:34), “Everyone who commits sin is a slave to sin.”

Abortion is the gravest of sins against God. It is committed by barbarians who deny that each and every human being is a child created in the image and likeness of God. These barbarians deceive expectant mothers, pull the wool over politicians’ eyes, and are enslaved by Satan himself. There are no greater barbarians than these.

Confront these tyrants with the truth and never stop. Join us today!