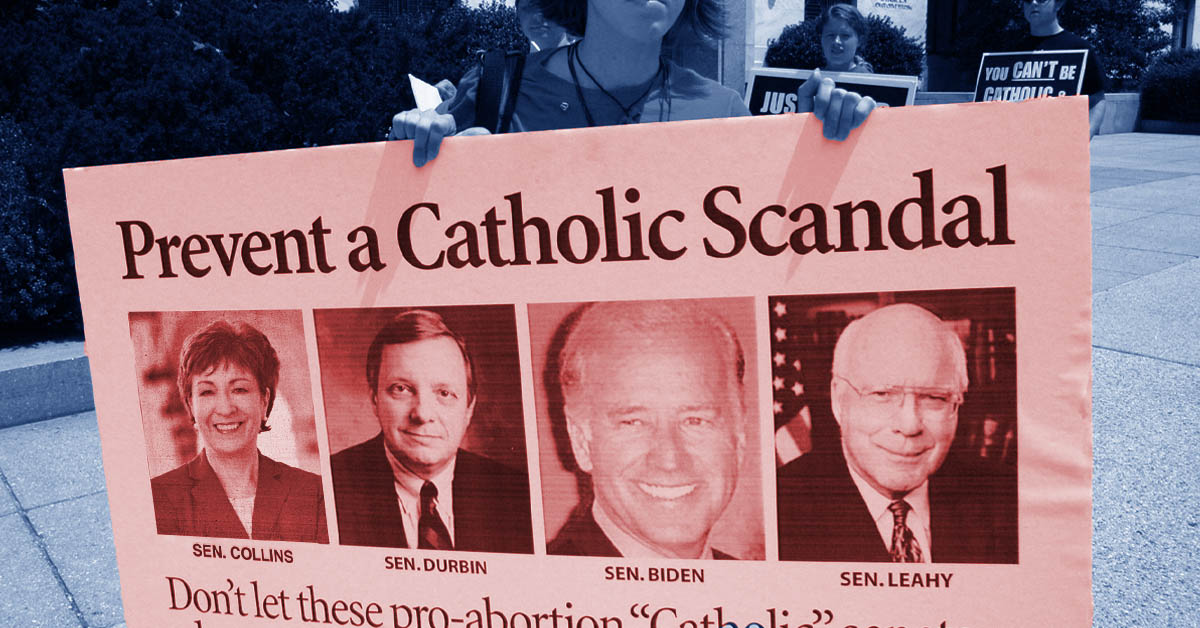 Shortly after it was announced that Joseph R. Biden had been elected the president of the United States, Archbishop Jose Gomez—president of the United States Conference of Catholic Bishops—announced that the USCCB would form a working group “to address any ‘confusion’ about a faithful response to a Catholic politician backing public policy that goes against church teachings, such as abortion and same-sex marriage.”

We found this announcement both perplexing and encouraging. In the intervening weeks, the real problem has become evident, as we see a difference in what Church prelates teach.

For example, Archbishop William Lori, chairman-elect of the US Bishops’ Committee on Pro-Life Activities, has said that the pro-life movement is itself rooted in the Eucharist. Lori recently preached: “The Eucharist unites and strengthens us in our efforts to secure justice for the unborn, and to create a culture wherein every human life is cherished, nurtured and protected from the moment of conception until natural death.”

But Bishop McElroy of San Diego, California, said during an online forum: “I do not see how depriving the president or other political leaders of Eucharist based on their public policy stance can be interpreted in our society as anything other than the weaponization of Eucharist and an effort not to convince people by argument and by dialogue and by reason, but, rather, to pummel them into submission on the issue.”

This disagreement among the bishops is not only bad for the Church but contributes further to the confusion many Catholics feel in the age of Biden. It is not a weaponization of Christ or His real presence in the Eucharist that is a concern, after all.

The most fundamental teaching of the Catholic Church is that Jesus Christ is truly present in the sacrament of the Eucharist. If this were not the case, there would be no need for a special working group to determine how to deal with public figures who claim to be Catholic as they pander to the culture of death. It is those people who are creating scandal, not the bishops who love Christ and desire to protect Him from those who would spit on His face in their quest to advocate for crimes against God, such as the abortion of a baby.

In recognition of this apparent divide among bishops, we are heartened by the possibility that our efforts could make a difference in the outcome of the working group’s recommendations. This is so because Catholic teaching should be the paramount foundation of their reflections. In that regard, we are heartened by the words of Archbishop Salvatore Cordileone, who “said that Communion can be withheld from someone ‘for the sake of their soul’ but only after ‘private conversations to try to move the person in their conscience’ have taken place.” He added: “Catholics must recover the ‘bigger picture’ of ‘worthiness to receive Communion,’ and ‘to be in the state of grace.’”

But then again, we do not know which bishops will be involved in the working group, and thus comes our recommendation.

We invite you to consider this and to share your views on defending Christ from sacrilege by denying the Eucharist to public figures who work against fundamental truths, such as the fact that abortion kills a person.

We ask you to contact Archbishop Jose Gomez and ask him to convey our concerns to the members of the working group, namely that the group should take a strong position that enforcing Church law, Canon 915, is the best way to deal with public figures—like President Biden—who are creating scandal by claiming they are Catholic and receiving the body of Christ in the Eucharist, both while supporting the abortion of babies.

Please share these words of Canon 915 in your e-mails, phone calls, or letters: “Those who have been excommunicated or interdicted after the imposition or declaration of the penalty and others obstinately persevering in manifest grave sin are not to be admitted to Holy Communion.” (emphasis added)

Please make sure that your communications with Archbishop Gomez are respectful and that you convey how very much you love Christ, the Eucharist, and the Church. Being positive is incredibly important in this age of negativity.

God bless you, and thank you for helping us share our concerns that scandal drives Catholics away from the Church and that truth and justice bring them back.