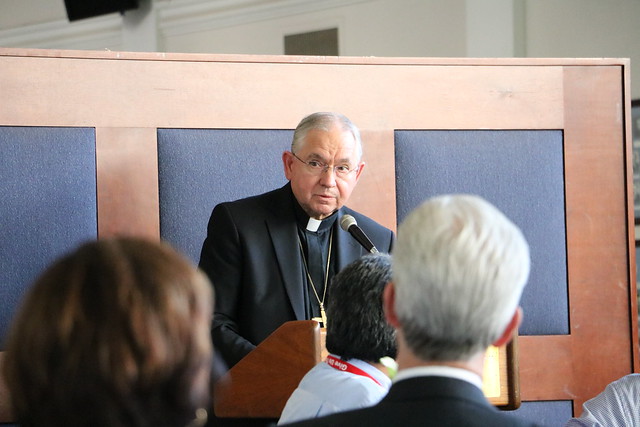 Throughout history, royalty has been welcomed with great parades, celebrations, the blasts of trumpets and all the pomp and ceremony befitting their office. Even our Blessed Lord was welcomed into Jerusalem with a procession and great revelry on Palm Sunday.

In 10 months, Roger Cardinal Mahony of Los Angeles is set to retire and a new Prince of the Church, Archbishop Jose Gomez, has been named as his successor. In lieu of being met with a warm welcome and the full embrace of a loving family, however, the Los Angeles Times has already unleashed a barrage of snide editorials, spitting its sarcastic venom right into his face.

For instance, the Times published this article, “A cardinal in training,” that said:

Of course, Gomez will be his own man, and he will bring different life experiences to the archbishop’s position, including his Latino heritage and his membership in Opus Dei, a conservative Roman Catholic fellowship known for its emphasis on self-denial. One question is whether this appointment signals a more confrontational style of leadership. For example, Mahony has refrained from joining some conservative bishops in calling on pro-choice Catholic politicians not to take Holy Communion. It would be comforting if Gomez emulated his predecessor’s circumspection. (Emphasis added.)

I can forgive the Times for not fully understanding the Catholic teaching on the Holy Eucharist, that Christ is truly present—body, blood, soul and divinity—and that one who receives Him in Holy Communion “without discerning the body, eats and drinks judgment on himself”(1 Cor. 11:29), but to ask a new archbishop to disobey Canon 915 and hope he will scandalously distribute Holy Communion to so-called “Catholic” political figures who consistently support the murder of children through abortion is not only inexcusable, but utterly abominable!

Times columnist Tim Rutten then weighed in with his piece, “Cardinal Mahoney’s successor a risky choice.” He laments Archbishop Gomez’s close association with Archbishop Charles Chaput because of his statements regarding Holy Communion and pro-abortion politicians:

Some also are bound to be wary of his close association with Archbishop Charles J. Chaput, his mentor in Denver and one of the church’s most stridently conservative voices. Chaput, for example, feels that Catholic office-holders who cast pro-choice votes ought to be denied Communion. He recently gave an address in Texas in which he argued that John F. Kennedy was wrong in insisting on separation of church and state.

In California, a staunchly Democratic state where one out of every four people is Catholic, that sort of confrontational leadership could have serious consequences. (Emphasis added.)

The fact of the matter is that pro-abortion politicians are not to be admitted to Holy Communion, as Canon 915 mandates. It says:

Those who have been excommunicated or interdicted after the imposition or declaration of the penalty and others obstinately persevering in manifest grave sin are not to be admitted to Holy Communion.

To “obstinately persevere” means that, even after correction, an individual makes no attempt to alter his or her behavior. The word “manifest” simply means that something is publicly apparent or well known. Grave sins or mortal sins are acts of such a serious nature that they completely sever man’s relationship with God. The Catholic Church has infallibly identified abortion, human cloning, human embryonic stem cell research, infanticide and euthanasia/assisted suicide as intrinsically evil acts against the Fifth Commandment. There is no circumstance in which these acts may be justified. Therefore, there can be no doubt that public figures, such as legislators who actively promote so-called abortion “rights” or accept contributions from pro-abortion organizations, and continue to do so even after correction from the Church, obstinately persevere in manifest grave sin.

There are many bishops (such as Cardinal Mahony) and priests who refuse to deny Holy Communion to public officials who actively work to expand the culture of death. Some bishops say that it is the responsibility of the individual to know the state of his or her own soul and worthiness for the reception of Holy Communion. Others have simply asked notorious politicians not to present themselves for Communion, but refuse to deny Communion to them. And most simply remain silent. But who is responsible for enforcing Canon 915 is clear. It states that such public grave sinners “are not to be admitted to Holy Communion.” Since the one administering Communion (bishops, priests, deacons and extraordinary ministers) has control over who is admitted and who is not, the canon cannot be referring to the individual presenting him or herself. This interpretation is confirmed by Canon 916, which states, “A person who is conscious of grave sin is not to celebrate Mass or receive the body of the Lord without previous sacramental confession …” In short, Canon 915 addresses the bishop, priest, deacon or extraordinary minister and Canon 916 addresses the congregation.

In case any doubt remains, it should be noted that in 2004, then-prefect of the Congregation for the Doctrine of the Faith, Joseph Cardinal Ratzinger (now Pope Benedict XVI), instructed the bishops of the United States as follows:

Regarding the grave sin of abortion or euthanasia, when a person’s formal cooperation becomes manifest (understood, in the case of a Catholic politician, as his consistently campaigning and voting for permissive abortion and euthanasia laws), his pastor should meet with him, instructing him about the Church’s teaching, informing him that he is not to present himself for Holy Communion until he brings to an end the objective situation of sin, and warning him that he will otherwise be denied the Eucharist. When “these precautionary measures have not had their effect or in which they were not possible,” and the person in question, with obstinate persistence, still presents himself to receive the Holy Eucharist, “the minister of Holy Communion must refuse to distribute it.”

Archbishop Gomez is a very devout prelate whose singular intention is the salvation of souls, most especially His lost sheep who promote abortion. He doesn’t need advice from the press or tabloid-esque inquiries into his Opus Dei affiliation. What he deserves is a prince’s welcome as he enters his new post, and what better way to welcome him than with a spiritual bouquet of prayers and fasting.

READ >>  Catholic Scandals and the Cross